In 1974, a young Professor of architecture in Budapest (Hungary) named Erno Rubik created an object that was not supposed to be possible. His solid cube twisted and turned - and still it did not break or fall apart. With colourful stickers on its sides, the Cube got scrambled and thus emerged the first “Rubik’s Cube”. It took well over a month for Erno to work out the solution to his puzzle. Little did he expect that Rubik’s Cube would become the world’s best-selling toy ever. 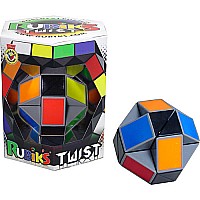